Instant Pot Barley is pressure cooked easily using no special tools and little preparation. Season and enjoy as a side dish or toss in salads, soups, stews and other dishes.

Cooking barley in your Instant Pot is a quick and easy way to prepare this nutritious grain. The pressure cooking method is a little quicker than the stovetop, with just a minute of hands-on time and around 20 minutes of cook time.

Save even more time and pressure cook a big batch of barley to freeze for use later on. Barley is perfect for meal prepping, adding to soups and stews, tossing with healthy green salads, and mixing into grain bowls. It can be used interchangeably with the grain farro.

The Instant Pot makes it incredibly easy to make perfectly cooked barley. This recipe includes instructions for the 2 common types of barley: pearl and hulled.

1 cup of uncooked barley is equivalent to 3 cups of cooked barley. The recommended serving size per person is approximately ½ cup.

*Do not change the cooking time when increasing or decreasing the quantity of barley.

Use any size pressure cooker to cook barley. I have an 8 quart Instant Pot Duo but 3, 6 and 10 quart pots all work here. One cup of uncooked barley is equivalent to 3 cups of cooked barley, so keep this in mind when changing ingredient amounts. Always account for the size that the recipe will create and not how much will fit uncooked in your Instant Pot!

There are no special tools needed when pressure cooking barley.

Barley is a cereal grain of the grass family that has a mild nutty flavor and a chewy texture. It's one of the oldest grains and has a fantastic nutritional profile. Barley is high in fiber, protein, B complex vitamins, magnesium, potassium and iron. It also has a low glycemic index and is a great food to include in many diets. Unfortunately, barley is not a gluten-free food because it is a grain.

What Is The Difference Between Pearl Barley and Hulled Barley?


Pearl Barley: Also known as pearled barley, is the processed version of the grain. It's the most common form of barley but is slightly less nutritious than hulled barley because it's outer bran layers have been removed. It has a neutral taste, has a shorter cook time, and is lighter in color than hulled barley.

Hulled Barley: Also known as hulless barley, hulled barley is a whole grain that's been minimally processed to remove just it's outer husk. It's used interchangeably with pearled barley in recipes but does have a longer cook time.

Can I Pressure Cook Both Types Of Barley?

Do I Need To Soak Barley Before Cooking?

There is no need to soak barley before pressure cooking.

Should I Rinse Barley Before Cooking?

You should rinse barley under cold running water before pressure cooking to remove excess starch, dust and other debris. This will also prevent sticking.

Is A Quick Or Natural Release Recommended?

It's fine to use a quick release when pressure cooking barley. But if you've walked away from the pot and lose track of time and end up letting the pressure release naturally that is fine! The barley will continue to cook as pressure naturally releases but not significantly enough for it to matter much.

How Can I Season Barley?

Basil, dill, parsley, chives, tarragon, and mint all go well with barley. A simple barley side dish seasoned with salt and pepper and drizzled with heart healthy extra virgin olive oil is a great way to enjoy it too.

STEP 1: Rinse the barley under cool running water to remove dust, debris, and excess starches. Put barley and water (or broth) into the inner pot of the pressure cooker. Stir, close the lid and seal the vent. Set to pressure cook/manual on high for 22 minutes. If using hulled barley, change the time to 25 minutes.

STEP 2: Complete a quick release of the pressure (or natural release if preferred). Remove the lid and fluff barley with a wooden spoon. Serve or store for use later on.

How To Use Barley

Use your leftover barley in a variety of dishes, from breakfast to dinner. Here are some ideas:

Fridge: Store cooked barley for up to 5 days in an airtight container.

Freezer: Store in freezer safe bags for up to 6 months. 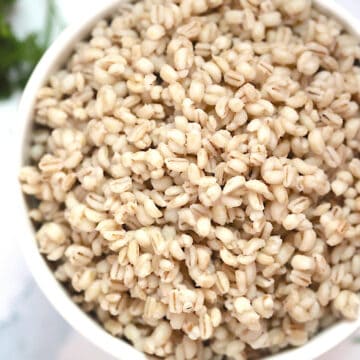 Cook's Tip #1: Add seasonings or spices to the water if eating as a side dish. Vegetable broth, chicken broth, or beef broth can also be used for added flavor.  Cook's Tip #2: If using older barley, you may need to add ¼ cup of water. If you're unsure about whether your barley has aged, add the extra water but simply drain the barley after pressure cooking if needed.  Storing: Store cooked barley for up to 5 days in the fridge or up to 6 months in the freezer.

This website uses cookies to improve your experience while you navigate through the website. Out of these, the cookies that are categorized as necessary are stored on your browser as they are essential for the working of basic functionalities of the website. We also use third-party cookies that help us analyze and understand how you use this website. These cookies will be stored in your browser only with your consent. You also have the option to opt-out of these cookies. But opting out of some of these cookies may affect your browsing experience.
Necessary Always Enabled
Necessary cookies are absolutely essential for the website to function properly. These cookies ensure basic functionalities and security features of the website, anonymously.
Functional
Functional cookies help to perform certain functionalities like sharing the content of the website on social media platforms, collect feedbacks, and other third-party features.
Performance
Performance cookies are used to understand and analyze the key performance indexes of the website which helps in delivering a better user experience for the visitors.
Analytics
Analytical cookies are used to understand how visitors interact with the website. These cookies help provide information on metrics the number of visitors, bounce rate, traffic source, etc.
Advertisement
Advertisement cookies are used to provide visitors with relevant ads and marketing campaigns. These cookies track visitors across websites and collect information to provide customized ads.
Others
Other uncategorized cookies are those that are being analyzed and have not been classified into a category as yet.
SAVE & ACCEPT
21 Shares
Share
Pin21
Tweet
Yum