This Traditional French Onion Soup is made by simmering thyme-seasoned caramelized onions in a rich red wine and beef broth. Serve topped with crusty bread and melted Gruyere for a decadent better-than-restaurant french onion soup.

I am SO excited to share my Traditional French Onion Soup recipe with you today! Traditional french onion soup topped with gooey melted cheese and crusty bread is the ultimate comfort food for me.

And this was so good the first time around that not only did I make it again for lunch the next day, but my husband, who NEVER finishes a bowl of french onion, ate his faster than me!

See, I am truer-than-true french onion soup addict. This may be the one meal that I have eaten more than anything else.

You know the etiquette rules of never eating something messy and gassy while on a date, particularly a first date, or in a business meeting? Well, on my first date with my now husband, what did I order?

There was a time that my grandmother took me to lunch three times a week (she had just retired and was bored!) and I ate french onion soup and Ceasar salad exactly three times a week. For an entire summer. And I never got sick of it.

When I went off to college I still wanted (and needed) my fix of french onion soup. So I bought canned french onion soup, heated it on the stove, and then broiled it with crusty bread and cheese. I thought it was delicious.

This soup is unbelievably rich and comforting and amazing. So come join me in making it this cold and rainy weekend...we are on bowl 3 this week!

Traditional french onion soup is made with these ingredients:

For the bread topping:

Onions: I believe that sweet onions make the best traditional french onion soup. But, if you only have yellow onions, these will do fine. Just promise me that next time you make it, you'll use the sweet onions!

Red Wine: Using real red wine and not cooking wine is what makes this soup better than any restaurant's. Red wine creates a truly rich and decadent broth that will make you never want to stop eating it. Please, do not use cooking wine.

I have made this French onion soup using Cabernet Sauvignon and Pinot Noir. Both give it stunning flavor, but I prefer the Cabernet for slightly more kick.

Traditional French Onion Soup is quite easy to make. Here's how to do it:

First, cut the onions into thin slices and dice the garlic clove.

Second, melt the butter in a large pan and add the onions, garlic, thyme, and a bay leaf. Sprinkle with a little salt and pepper (no need to measure, you'll season it later).

Cook for 25 minutes, until the onions are caramelized. Stir it every so often, but not too much. You want to give the onions a chance to brown, but not burn.

Now add the red wine and simmer until the liquid is mostly evaporated, about 5 minutes.

Then discard the bay leaf. Sprinkle the onions with flour and cook on low heat for 5 minutes, stirring often so the flour doesn't burn. You can use the spoon while stirring to cut your onions further if they are too big.

While the broth simmers cut a baguette into six ½ inch slices. Sprinkle the bread with Gruyere cheese and a little paprika. Broil for 3-5 minutes until golden brown.

Transfer the soup to crocks and top with 2-3 slices of cheesy bread.

I love serving all soup, especially this recipe, in soup crocks. The handles and lid make it so much easier to carry to the table than handle-less soup bowls.

The broth tastes best when eaten fresh, right off the stove. You should serve it immediately if possible, but warming up in the microwave later in the day is the next best thing.

You could freeze it if you absolutely had to, but I don't recommend it because the flavors will break down.

However, there are plenty of soups that freeze beautifully. You should try these comforting soups, where many of them are freezer-friendly! 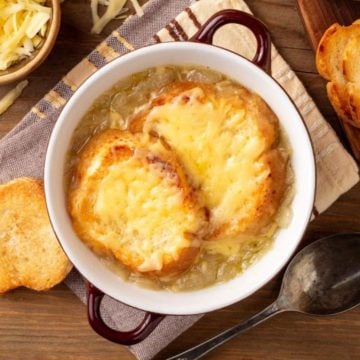 *Do not use red cooking wine. The wines that will give the soup the richest flavor are Pinot  Noir or Cabernet Sauvignon.  Traditional french onion soup tastes best when served immediately. You can store it in the fridge for a few days or in the freezer for 6 months, but the rich flavor from the wine will diminish.

This website uses cookies to improve your experience while you navigate through the website. Out of these, the cookies that are categorized as necessary are stored on your browser as they are essential for the working of basic functionalities of the website. We also use third-party cookies that help us analyze and understand how you use this website. These cookies will be stored in your browser only with your consent. You also have the option to opt-out of these cookies. But opting out of some of these cookies may affect your browsing experience.
Necessary Always Enabled
Necessary cookies are absolutely essential for the website to function properly. These cookies ensure basic functionalities and security features of the website, anonymously.
Functional
Functional cookies help to perform certain functionalities like sharing the content of the website on social media platforms, collect feedbacks, and other third-party features.
Performance
Performance cookies are used to understand and analyze the key performance indexes of the website which helps in delivering a better user experience for the visitors.
Analytics
Analytical cookies are used to understand how visitors interact with the website. These cookies help provide information on metrics the number of visitors, bounce rate, traffic source, etc.
Advertisement
Advertisement cookies are used to provide visitors with relevant ads and marketing campaigns. These cookies track visitors across websites and collect information to provide customized ads.
Others
Other uncategorized cookies are those that are being analyzed and have not been classified into a category as yet.
SAVE & ACCEPT
2K Shares
Share
Pin2K
Tweet
Yum