Syrian Potato Salad with Lemon and Mint is a light and refreshing traditional Middle Eastern side dish dressed with lemon and olive oil then tossed with all spice, fresh mint, and parsley. Perfect for any BBQ, spring or summer meal! Light on calories and big on taste!

Syrian Potato Salad is a recipe that comes from my family's "Cookin' Good with Sitto" book. With its light dressing and crisp flavor, it's a refreshing salad great for barbecues and family picnics.

It's a Middle Eastern recipe book that includes all of the basics for being able to make delicious, traditional Syrian meals. The recipes are authentic crowd pleasers developed by my very own Middle Eastern family decades ago.

They remain timeless masterpieces that we enjoy eating on holidays, family gatherings, and summer BBQs. My Syrian grandmother has taught me how to make many of her best, favorite traditional Middle Eastern meals.

Some of our favorites are stuffed cabbage, stuffed grape leaves, stuffed peppers and baby lamb meatballs cooked in tomato sauce.

All spice is a staple in the kitchen of a Syrian house, as it's used to season many of the meats and vegetables.

Lemon juice, olive oil, and garlic are also staples that anyone wanting to make traditional Middle Eastern recipes should have on hand.

Use any potato that you'd like. Golden potatoes and baby potatoes are also great choices.

You can make your potato salad using a combination of mint and parsley or only mint or only parsley.

First, peel the potatoes, cut them into quarters, and boil them. Put in a pot with enough water to cover and bring to a boil on high heat. Boil them for at least 20 minutes and then test if they are done by poking with a fork. If the fork easily pierces the potato, they are done. If not, boil in 5 minute increments until they are cooked through.

Second, cut the potatoes in small cubes (the size is up to you). Toss with the olive oil, lemon juice, all spice, mint, parsley, and salt. Allow to chill before serving for the best taste.

Potato salad with lemon and mint tastes best when you allow the flavors to marry by chilling for a few hours before serving. Right before serving give it one last toss to evenly coat all of the potatoes with the dressing and herbs. Give it a taste and season more if needed.

Syrian potato salad with lemon and mint does not have to be cold to be served. It is delicious when it comes to room temperature, so it's a great refreshing addition to BBQ, picnic, or poolside party.

This potato salad is always best served a few hours after making. But you can store it in the fridge covered tightly with plastic wrap. It will keep well for 2 days before the potatoes start to soften a little too much to enjoy. 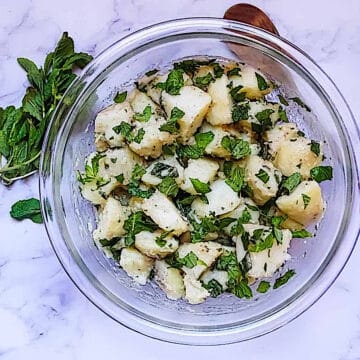 This website uses cookies to improve your experience while you navigate through the website. Out of these, the cookies that are categorized as necessary are stored on your browser as they are essential for the working of basic functionalities of the website. We also use third-party cookies that help us analyze and understand how you use this website. These cookies will be stored in your browser only with your consent. You also have the option to opt-out of these cookies. But opting out of some of these cookies may affect your browsing experience.
Necessary Always Enabled
Necessary cookies are absolutely essential for the website to function properly. These cookies ensure basic functionalities and security features of the website, anonymously.
Functional
Functional cookies help to perform certain functionalities like sharing the content of the website on social media platforms, collect feedbacks, and other third-party features.
Performance
Performance cookies are used to understand and analyze the key performance indexes of the website which helps in delivering a better user experience for the visitors.
Analytics
Analytical cookies are used to understand how visitors interact with the website. These cookies help provide information on metrics the number of visitors, bounce rate, traffic source, etc.
Advertisement
Advertisement cookies are used to provide visitors with relevant ads and marketing campaigns. These cookies track visitors across websites and collect information to provide customized ads.
Others
Other uncategorized cookies are those that are being analyzed and have not been classified into a category as yet.
SAVE & ACCEPT
778 Shares
Share
Pin778
Tweet
Yum