Making Baked Pears with Apple Crisp topping is a wonderful way to use fresh picked orchard apples and in-season pears. While apples get so much love during the fall months, pears are rarely spoken about.

I think it's a shame that poor pears are like a red-headed step child. Personally I find them to be one of the best fruits for babies and small children. They are softer than apples, the skins are thinner and pose less of a choking hazard, and they are sweeter in flavor (to me at least).

Maybe its because there isn't a lot of variety to pears like there are in the apple family. It seems like every time I go to the grocery store there is a different selection of apples. Plus, we let our kids indulge in apple juice and not pear juice. 😀

Apples are fantastic, don't get me wrong. We love them too and always have them lying around, but we love pears too! They are a great combination to tweak one of the kid-friendliest fall snacks, apple nachos!

Pears are high in vitamin C, copper, and folate, among many other vitamins and minerals. Did you know that they actually have less sugar and are higher in fiber than apples?

So it's about time we give pears the love they need and make these delicious Baked Pears with Apple Crisp Topping.

To make Baked Pears with Apple Crisp Topping, you need:

Next, slice the pears in have and scoop out a hole in the center of each half. You should scoop out the seeds and any hard core pieces. Then brush the pears with a little lemon juice to prevent them from browning while you make the apple crisp topping.

After brushing with lemon juice, brush them with melted butter to coat thoroughly. Sprinkle with cinnamon sugar, if you'd like that extra sweetness on the baked pears. Fill the hollowed out centers with diced apples. Brush the apples with a little lemon juice, too, to prevent them from browning while cooking.

Now make the apple crisp topping by combining the flour, oats, sugar, cinnamon, and nutmeg with melted butter. Mix until its nice and combined, adding more melted butter if it's too dry. The mix should stick when pressed together.

Press down about 2 tablespoons of apple crisp topping onto each pear. Drizzle with melted butter.

Bake for 35-45 minutes. Mine took exactly 38 minutes for a fork to pierce the pear easily, meaning it was perfectly done.

That's it, now get baking! 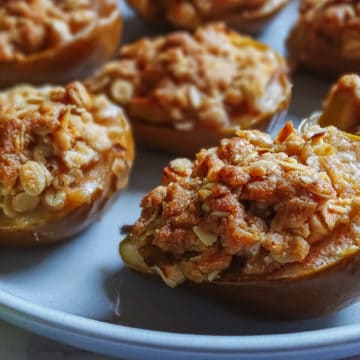 If not serving immediately, warm pears in the toaster for 5 minutes.  Baked Pears with Apple Crisp Topping can be eaten alone for breakfast, snack, or dessert. They are also delicious with vanilla ice cream and go great with hot tea, coffee, or cider.

Baked Pears with Apple Crisp Topping are best served immediately, warm from the oven still. To enjoy at a later time, toast for about 5 minutes.

Baked pears are delicious eaten alone or served with a scoop of vanilla or coffee ice cream. Of course, with ice cream is my daughter's favorite way to eat them.

Enjoy your baked pears as a breakfast alongside coffee or tea and as a snack paired with apple cider or hot chocolate. They are also a wonderful fall dessert after dinner.

That's all there is to it! I hope you enjoy these delicious baked pears.

If you've made them, I'd love to hear how they turned out! Let me know in the comments below.